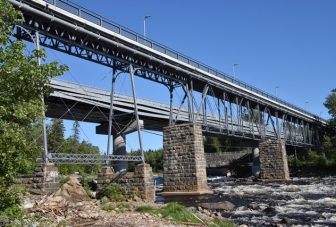 Preserved for pedestrian use, this ancient iron bridge is one of the only known truss bridges in Canada with the rare Phoenix columns. The bridge was originally built as a railway bridge but eventually abandoned by the railway and ownership of the bridge passed to the municipality in 1929 who converted it for vehicular use in 1931-1932. It served vehicular traffic until 2015 when a new highway bridge was built next to the heritage bridge. At this time, the heritage bridge was restored and preserved for pedestrian use. This bridge is one of the most important heritage bridges in Canada due to its age, use of Phoenix columns, and outstanding historic integrity. The only major alteration is replacement of some of the sway bracing Phoenix columns with welded replacements. However, the truss lines remain unaltered, and even the deck stringers remain original with Phoenix Iron still clearly visible on the beams. The bridge is composed of two large approximately 126 foot pin-connected Pratt deck truss spans which make use of Phoenix columns in their members and chords. There are also shorter approximately 43 foot rivet-connected Warren deck truss approach spans. These spans are also a design used by the Phoenix Bridge Company and they are among some of the oldest rivet-connected truss spans in Canada, since pin connections were more common at this time. The approach spans are supported by bents that also use Phoenix columns.