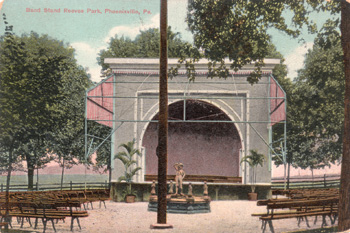 Historic Reeves’ Park has been Phoenixville’s public square since 1872. The land, located between 3rd and 4th Avenues, and Starr and Main Streets, was the gift of David Reeves, President of the Phoenix Iron Company. The park has always played an important role in the life of the borough. Its band shell, which was restored using period postcards from 1908, has been the scene of many concerts and gatherings. The famous Griffen Cannon produced by the Phoenix Iron Company and utilized throughout the Civil War, remains proudly on display on the park grounds. The Dogwood Festival enlivens the park each May with amusements, rides, and food. A children’s playground is the park’s most modern adornment.