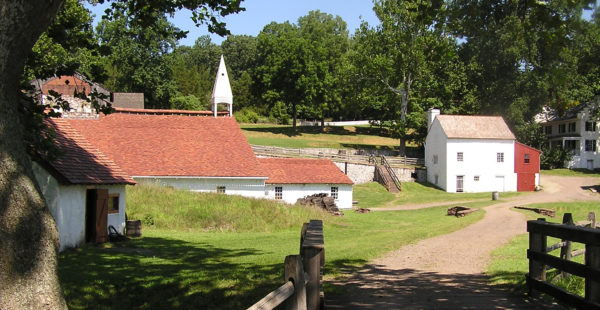 In America’s industrial infancy, tall stone structures venting smoke and flames were a familiar part of the rural landscape. These charcoal-fueled iron furnaces produced the versatile metal crucial to the nation’s growth. For over a century, Hopewell was one of the hundreds of “iron plantations” built around this technology. Here generations of ironmasters, craftsmen, and workers produced iron goods during war and peace – ranging from cannon and shot to the well-known Hopewell stove and domestic items such as pots and sash weights. Shared social and family bonds in an atmosphere of reasonable cooperation made these plantations stable and productive communities, the base on which America’s iron and steel industry was founded.

Mark Bird built Hopewell Furnace in 1771. Early colonists had carried blast furnace technology to America in the mid-17th century and by the time of the Revolution, American forges, furnaces and mills were turning out a seventh of the world’s iron goods much to the chagrin of England. Pennsylvania was the most important iron-producing center in the colonies. Over the years with several different owners, the iron production declined. The Civil War era gave the furnace a temporary reprieve, but the old rural charcoal-fired and water-powered furnaces were transformed to urban concentrations of steam-powered, hot-blast coke and anthracite furnaces. In the summer of 1883, Hopewell Furnace made its final blast.

Today, the site is restored to the period of 1820-40. A tour will interpret the role of the ironmaster and the founder and demonstrate the iron-making process. When “in blast”, the community worked in rhythm to assure the quality of the product. A tour of the park will show you life at the furnace including the ironmaster’s mansion, the springhouse and smokehouse for storing and curing foods, the tenant houses and boarding houses for the workers, the schoolhouse ruins. The blacksmith shop is operational to show the work produced there and the cast house also demonstrates the moulders casting iron into stove plates and other products.

Hopewell Furnace is open daily except for most federal holidays. In summer, activities depicting village occupations are presented. Guided tours are given. Check the website for special events and programs. Nearby French Creek State Park has picnicking, camping and swimming facilities.