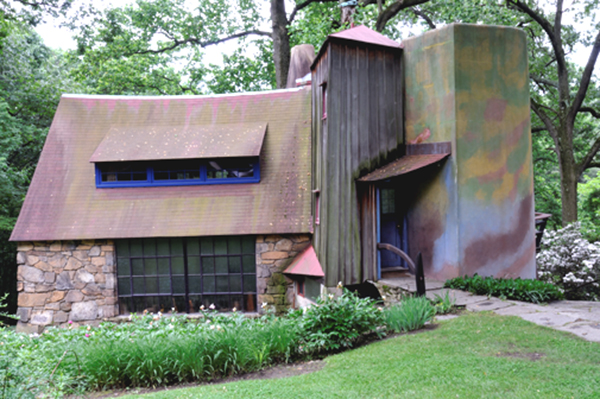 Wharton Esherick (1887-1970) was among the vanguard of artists who created an American sculpture style early in the 20th century. Working primarily in wood, he extended his sculptural forms to furniture, furnishings and interiors. Considered to be the most influential designer of the century and know as the “Dean of American Craftsmen”, his works are now in major American museums as well as private collections.

The Studio, which took Esherick 40 years to build, reflects the artist’s changing styles from organic to expressionist to the lyrical free forms for which he is best known. The building, its contents and grounds have been preserved much as they were when he lived and worked there. On exhibition are more than 200 of his works – paintings, woodcuts, sculpture, furniture – produced between 1920 and 1970. Pieces are displayed without cases and can be touched and examined closely.

The Wharton Esherick Studio is a National Historic Landmark for Architecture. Admission is charged and the Studio is presented through one hour guided tours for which reservations are required. Groups only are received Monday to Friday. Visitors are requested to wear low-heeled shoes to protect the Studio’s floors. Call to check hours and days of operation.