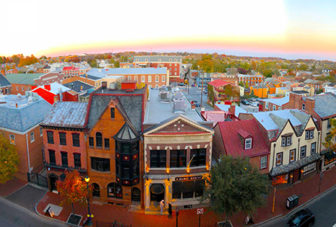 The Borough of West Chester has been the seat of government in Chester County since 1786 although it wasn’t incorporated until 1799. In the heart of the town is its courthouse, a classical revival building designed in the 1840s by Thomas U. Walter, one of the architects for the Capitol in Washington, D. C. Legal offices abound throughout. Today West Chester is part of the rapidly growing suburban complex surrounding Philadelphia.

The area was originally known as Turk’s Head after the Inn of the same name located in what is now the center of the borough and was settled principally by members of the Society of Friends. Today the downtown is filled with art galleries, unique retail shops, and a full array of restaurants to please gourmand tastes.

West Chester University, the fourth largest Philadelphia-area university, offers undergraduate and graduate programs. The West Chester Historical Society interprets the history of Chester County with programs and exhibits and a collection to serve researchers. Extraordinary Bed and Breakfast facilities are located in and around the West Chester historic countryside to welcome visitors. 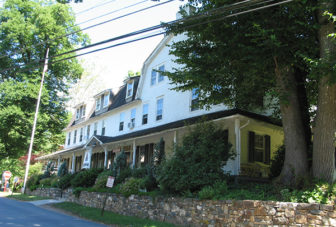 Nestled among gentle knolls and guarded by centuries-old trees, the historic village of Yellow Springs is a tranquil reminder of our American heritage. Located in Chester Springs, Pennsylvania, Yellow Springs stirs the imagination of all who visit. For more than 275 years, it has been a contributor to our nation’s history, tradition and folklore.

From the earliest days, when Lenape Indians recognized the mystical yellow water bubbling up from the ground as having unique curative powers, to the year 1722 when a colonial health spa was opened, Yellow Springs was establishing a mission of encouraging harmony between man and nature. This was the site of the only Revolutionary War hospital commissioned and built by the Continental Congress and provided medical aide to General George Washington’s beleaguered troops at Valley Forge. The establishment of the Chester Springs Soldiers’ Orphan School and Literary Institute continued to provide comfort.

The exceptional landscape was attractive to the Pennsylvania Academy of the Fine Arts when they established a country school on the grounds. Further creative energies flowed forth when the site became home for the film production efforts of Good News Productions.

Since 1974, Historic Yellow Springs has accepted the responsibility for preserving, sharing and celebrating the important heritage found in our 18th and 19th century architecture and encouraging the study and enjoyment of art and nature in this unique setting.

The village is open Monday to Friday 9 a.m. to 4 p.m. and on weekends for programs and events. The grounds are open dawn to dusk. The largest art show in Chester County is held here each spring as well as an antiques show in the fall. A jazz festival, children’s camps and many educational programs are held throughout the year. Check the website for dates. Self-guided walking tours and hiking trails are available; guided group tours are by reservation.

Waynesborough is a magnificent country manor house in the Georgian style located five miles from Valley Forge National Historic Park. Its most famous occupant was Major General Anthony Wayne (1745-1796), a Revolutionary War hero. Wayne served with General George Washington and the Marquis de Lafayette, led the Pennsylvania Line in the battles of Brandywine and Germantown, weathered the Valley Forge encampment and fought on Monmouth. He was elevated to the status of national hero after his decisive victory in 1779 at Stony Point on the Hudson River.

After the war, Washington appointed Wayne first commander of the Legions of America (United States Army). He fortified and defended the western frontier against further encroachment by the British and Indians, and defeated the Indian nations at the Battle of Fallen Timers, thus opening the territory for settlement. Fort Wayne, Indiana and countless smaller towns, townships and counties in Pennsylvania and today’s upper Midwest bear his name as a stamp of his presence in those years. The nickname “Mad Anthony” for which he is remembered, was thought to have been earned by Wayne for his battlefield daring.

With the Paoli Massacre fought on its doorstep, Historic Waynesborough sustained little damage and was expanded over the centuries. This spacious farmhouse features General Wayne’s uniform, Revolutionary War maps and an impressive collection of three centuries of Wayne family furnishings. An introductory video shown in a converted carriage house tells the story of the Battle of Paoli.

Advanced reservations are required for tours and school field trips. Many aspects of the war, daily farm life, furnishings and silver, architecture and 18th century children’s life are explained. In addition, facilities are available for business conferences in the carriage house or weddings or other social functions on the grounds. Call for information, hours and fees. 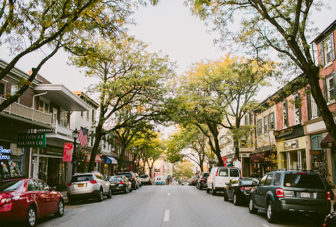 Kennett Square may revere its past but there is much to do in the town today.

A leisurely walking tour through the town of Kennett Square’s historic district will give you the feel for what the borough was like 200 years ago. Travelers found the village a good place to stop, including Baron Wilhelm van Kynphausen and General Sir William Howell, who stayed one night before marching to the Battle of the Brandywine in 1777. Incorporated in 1855, the borough played an important role in the Underground Railroad and many of its prominent citizens helped and comforted slaves on their passage towards the North Star. The story of the Underground Railroad is on display at the History Station. This historic station began operations with passenger and freight service in 1859 and was a vital part of Kennett Square life for almost 100 years. Today, it is home to permanent and rotating exhibits regarding the major influences on the area.

Historic Kennett Square exemplifies the best of small town America. Many of the houses and buildings are listed on the National Register of Historic Places. It also offers plenty of cultural and recreational activities and combines elements of tradition with a commitment to revitalization. You can enjoy browsing, dining and shopping in the many delightful stores and restaurants. This is a wonderful place to visit and explore.

Be sure to check the Calendar of Events online. From First Friday Art Strolls, theatre in the park, mushroom festivals, candlelight holiday home tours and a holiday parade, there is something for everyone.